Posted: June 30, 2014 | Author: Robert (Bob) Cordery | Filed under: Wargames publications | Leave a comment
When I returned from our recent cruise, the latest issue of MINIATURE WARGAMES WITH BATTLEGAMES magazine was waiting for me. I have only just managed to have a quick flick through this issue … but it looks as if it contains plenty of articles that will be of interest to me.

The Land of the Midnight Sun

Posted: June 29, 2014 | Author: Robert (Bob) Cordery | Filed under: COW (Conference of Wargamers), MIscellaneous musings | 4 Comments
Sue (my wife) and I have been on our travels again. She found a great last-minute deal on a cruise to Iceland, the Faroe Islands, and the Orkney Islands on P&O’s Arcadia … and booked it. As a result we have been away from home for twelve nights, and I have come back with lots to write blog entries about!

These travel-related blog entires will be appearing over the next week or so, along with the normal sort of blog entries that I write. The latter will include a brief run-down on the latest issue of MINIATURE WARGAMES WITH BATTLEGAMES and a description of the latest issue of WARSHIP annual.

My most important pre-occupation for the next fortnight will be preparing for COW2014 (this year’s Conference of Wargamers). It starts on 11th July and ends on 13th July, and at present we expect to cater for over well forty attendees. I have the programme ready to take to the printer tomorrow, and it will be sent out to attendees by the end of the week.

Posted: June 27, 2014 | Author: Robert (Bob) Cordery | Filed under: Painting | 20 Comments
I decided to have another go at painting a wargames figure … and this time I chose a 20mm-scale World War 2 one for my experiment.

I used almost exactly the same method as I used for my recently-painted Jacklex figures … and the result looked like this:

The Nut Brown Indian Ink does add shadowing … but I think that the darkening effect is too great. As a result I think that I may well miss that stage of the process out when I paint my next figures.

(Note: Most of the paints I used on this figure were craft acrylic paints bought in a local craft shop. I found them to be just as easy to use as specialist modelling acrylic paints … but they were a LOT cheaper!)

Posted: June 25, 2014 | Author: Robert (Bob) Cordery | Filed under: Painting | Leave a comment
The figures were then given a coat of Humbrol Gloss polyurethane varnish. I prefer this finish as it both protects the figures and makes them look like toy soldiers … which is – after all – what they are!

I had not used this painting process for a very long time, and I have re-learnt some useful lessons. Using Nut Brown India Ink is a quick and simple way to shade a figure … but the colours used to paint the figures have to be lighter and the detail more pronounced in order for the full effect not to be lost.

Posted: June 24, 2014 | Author: Robert (Bob) Cordery | Filed under: Painting | 8 Comments
At this point the figures looked a bit of a mess … and I nearly stopped the process then and there. (My choice of colours had tended to be similar is shade if not in colour, and the ‘inking’ had made the figures look almost monochromatic.) In the end I decided to finish them to see what they would look like.

The base of each figure was then painted. I used Yellow Ochre as I think that it looks better on the tabletop.

Posted: June 23, 2014 | Author: Robert (Bob) Cordery | Filed under: Painting | 2 Comments
At this point the figures were painted … but lacked any shading or detail. In order to achieve this quickly and easily I painted the whole figure with Windsor & Newton Nut Brown Indian Ink.

The ink was allowed to run into the undercuts etc. on the figures, and any surplus ink was removed using a brush that was regularly wiped clean.

I then let the ink dry overnight. (N.B. This is very important as the ink has to be absolutely dry before the next stage of the painting process can take place.)

Posted: June 22, 2014 | Author: Robert (Bob) Cordery | Filed under: Painting | 2 Comments
I continued painting on the details. The order I did this in was as follows:

I then let the paint dry overnight. 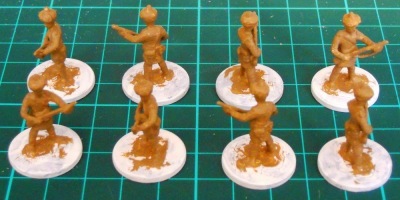 I then put each figure onto a display magnet. (These are sold in packs in large office supply stores and stationers.) I use display magnets because they are easy to get hold of when I am painting … and the figures don’t move around on them thanks to the steel pennies I have based each figure on. 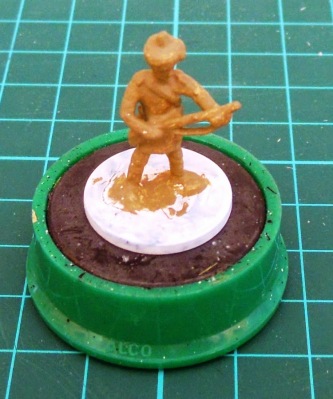 I then began the process of painting on the details. The order I did this in was as follows:

I then let the paint dry overnight. 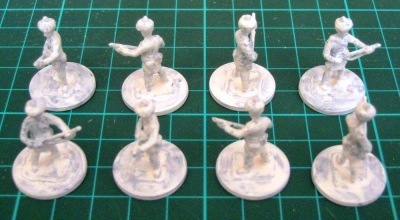 Now I am no great shakes as a figure painter (my figures often look like they have been painted by a gorilla with a 6-inch brush!), and have not painted any figures from scratch for a very long time. I decided, therefore, to see if I could make a reasonable job of these simple figures using a technique that I used many years ago … and the following blog entries will describe my progress.

The first step was to clean the casting up using emery paper and modelling files. As the bayonets were either badly bent or broken, I removed them. I then washed the figures to clean off any dirt, and once they were dry I superglued them to steel pennies.

I then primed them using a brush and Humbrol matt black enamel paint.