Posted: August 31, 2017 | Author: Robert (Bob) Cordery | Filed under: Wargame Design | 26 Comments
In reply to a comment on my recent blog entry, Archduke Piccolo made mention of the Euclidean, Chebyshev, and Manhattan methods of measuring distances on a squared grid.

I knew a little (not much at all, in fact!) about the three different methods, but spurred on by his comment, I found out more … and decided that what I found out might be of interest to other wargamers who use square gridded tabletops.

Euclidean Distance
Euclidean distance (or Euclidean metric) is the ‘ordinary’ straight-line distance between the centres of two grid squares as one would measure using a simple ruler.

It is named after Euclid of Alexandria, the Greek mathematician who is regarded as being the father of geometry.

Chebyshev Distance
Chebyshev distance (or maximum value distance) is a metric defined on a vector space where the distance between two vectors is the greatest of their differences along any coordinate dimension. For example, in Chebyshev distance all eight adjacent grid squares from a given grid square can be reached by one unit.

It is named after Pafnuty Lvovich Chebyshev, a Russian mathematician. 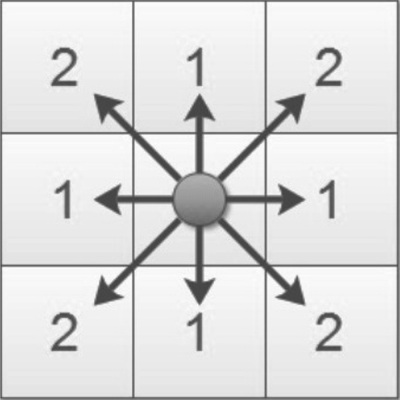 It takes its names from the shortest distance a taxicab can take to go from one place to another in a city built on a squared gridded pattern, such as Manhattan.

Note: According to Wikipedia:

In mathematics, a metric or distance function is a function that defines a distance between each pair of elements of a set. A set with a metric is called a metric space.

Well I hope that cleared that up for you!

Posted: August 30, 2017 | Author: Robert (Bob) Cordery | Filed under: Battle Report, The Portable Wargame | 8 Comments
As promised, Archduke Piccolo has written a very interesting blog entry in which he comments on his recent re-fight of the World War II scenario featured in my book THE PORTABLE WARGAME.

… into one that would work on his square gridded tabletop. 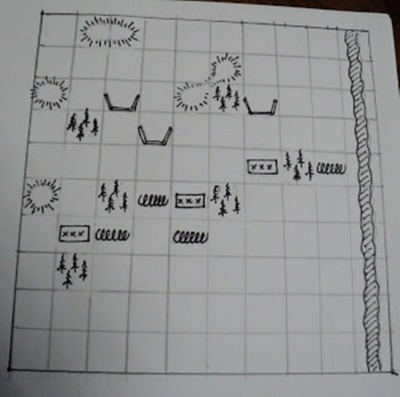 Anyone who wants to do something similar in the future will find this an extremely useful example to follow.

The second part of the debrief the examines the effect of using the system of each side’s total SP being gradually eroded by combat as opposed to the ‘Sudden Death’ option, and looks at the way several of the rules can be interpreted and/or used. He also raises the very valid point that there are no specific restrictions on how far an Artillery unit can ‘see’ (and therefore fire) on the battlefield if there are no obstacles between it and a target, and the fact that there are no reconnaissance rules.

In my reply to these last points I commented that:

‘I did include recce and spotting rules in early drafts of the rules, but they fell foul of my play-testing. They didn’t seem to add anything to the game (i.e. I usually forgot to use them!), and it was just as easy to account for indirect artillery fire by only allowing artillery that could fire indirectly to do so, and to penalise them when they did. (They don’t get a +2 on their firing dice throws.)‘

Having followed Archduke Piccolo‘s blog for some time, and knowing that he is a very good wargame designer, I suspect that he will come up with some suitable rules that answer the points that he has raised … and that I will want to use myself!

At the end of his blog entry Archduke Piccolo has included several photographs of his proposed Not Quite Mechanised Soviet Mechanised Brigade. This comprises: 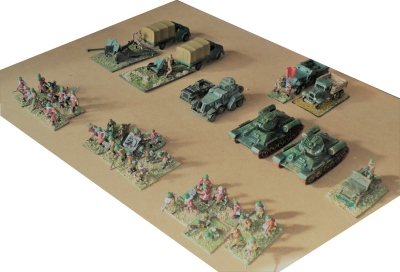 In an operational-level wargame this could easily pass muster as a Soviet Mechanised Corps as well as being an ideal basis on which to build a Soviet force for use in a PORTABLE WARGAME battle.

With just a week to go before Connections UK 2017 takes place, what looks like being the final draft of the programme is now available … and it looks like this:

I will be taking an active part in this year’s conference, and I am looking forward to it. It is very much at the professional end of wargaming, and makes an interesting contrast to COW (the Conference of Wargamers) which tends to be aimed at the hobby end of the wargaming spectrum.

Posted: August 28, 2017 | Author: Robert (Bob) Cordery | Filed under: Colonial | 20 Comments
Last night I watched the first episode of the second series of VICTORIA … and there were one or two things that jarred with me.

This series is what can best be described as being soap-opera history. This is not to say that it isn’t enjoyable to watch, but it tends to simplify events and motivations, and some of characters seem to have an element of caricature about them.

Firstly the uniforms worn by the soldiers of the British Army didn’t look right. The Guards seemed to be wearing uniform coats that only fitted where they touched, and didn’t impart the sort of smartness one would have expected. In addition, in one shot I saw bandsmen wearing spiked helmets from much later in the nineteenth century.

Secondly Doctor William Brydon – the first survivor from Elphinstone’s abortive retreat from Kabul to reach to British-controlled territory – was brought before Queen Victoria to tell her about the Battle of Gandamak. Despite having travelled all the way back from India (a journey that would have taken several months), he appeared with a bandage wound around his head. Now I know that the Victorians seemed to take exaggerated care when it came to illness and injury, but this defied belief.

Finally the good doctor related that his good friend Captain Souter of the 44th Foot had died singing the National Anthem, and his body was shown lying in the snow. The truth of course is that Captain Souter was one of nine soldiers of the 44th who were not killed by the Afghans.

This all sounds a bit nitpicking on my part, but as far as I can see these are simple points that a half-decent researcher/script adviser should have spotted.

(If anyone from the company making this series reads my blog, I am available to act as a military advisor for a very reasonable fee!)

Posted: August 28, 2017 | Author: Robert (Bob) Cordery | Filed under: The Nugget, Wargame Developments, Wargames publications | 2 Comments
The editor of THE NUGGET sent the latest issue of the journal to me last night, and I hope take it to the printer tomorrow or on Wednesday. This should mean that it will be printed and posted out to members of Wargame Developments by the weekend or early next week.

IMPORTANT: Please note that this is the first issue of THE NUGGET to be published for the 2017-2018 subscription year, and that members who have not already re-subscribed can do so by visiting the relevant page on the Wargame Developments website.

Posted: August 27, 2017 | Author: Robert (Bob) Cordery | Filed under: Colonial, Late 19th Century | 8 Comments
On 27th August 1896 the British Empire fought the shortest war in its history when it took on and defeated the Sultanate of Zanzibar in less than an hour.

On 25th August the pro-British Sultan Hamad bin Thuwaini died, and was replaced by Sultan Khalid bin Barghash, who resented British interference in the ruling of Zanzibar. The British wanted Hamud bin Muhammed, who was favourable to British interests, to become the new sultan. According to a treaty signed in 1886 the British consul was supposed to agree to the accession of the new sultan, and as Sultan Khalid bin Barghash had not bothered to obtain this agreement, this was seen as being tantamount to an act of war. An ultimatum was sent to Sultan Khalid that demanded that he leave the sultan’s palace with immediate effect. His response was to bring troops into the palace and the area surrounding it, and the building itself was barricaded.

The ultimatum expired at 9.00am on 27th August, and two minutes later a force of Royal Navy warships commanded by Rear Admiral Harry Rawson opened fire on the palace. When firing ceased thirty eight minutes later, over five hundred Zanzibaris were dead and wounded, the palace was badly damaged, and Khalid had fled. (He later sought sanctuary in German East Africa.)

Later that day the new Sultan Hamud bin Muhammed took over, and British influence over Zanzibar was restored.

Posted: August 26, 2017 | Author: Robert (Bob) Cordery | Filed under: Battle Report, The Portable Wargame | 6 Comments
Unfortunately I have not been able to fight any wargames since my return from COW (the annual Conference of Wargamers that is run by Wargame Developments) in early July, but that does not stop me from reading and enjoying other people’s battle reports.

Yesterday Archduke Piccolo – who is one of my regular blog readers – wrote a battle report about his re-fight of the World War II scenario that is featured in my PORTABLE WARGAMES book. He obviously enjoyed the battle, and his narrative can be read here.

The Soviets are pressing forward and attacking the German defences. © Archduke Piccolo.

What interested me in particular about this battle report was the fact that the result was different from that in the book. In my battle the Soviet forces made some headway, but eventually became too exhausted to continue their attacks, whereas in Archduke Piccolo‘s battle the Germans were pushed out of their defensive positions by the somewhat depleted Soviet attackers. 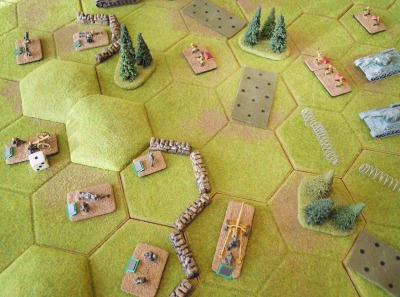 The Soviet attacks were not as successful when I fought this battle.

This was an excellent battle report, and I thoroughly recommend anyone who has or might be interested in using my rules to read it. I don’t think that you will be disappointed.