Why didn’t I think of creating one before? … a hex grid with co-ordinates

Posted: November 29, 2017 | Author: Robert (Bob) Cordery | Filed under: The Portable Wargame | 30 Comments
During Arthur Harman’s recent PORTABLE WARGAME-related visit it became apparent that it would be extremely useful for players to have a hex grid available to them that had co-ordinates so that they could plot the position of any hidden units etc. After a bit of trial and error I managed to create such a grid … and here it is: 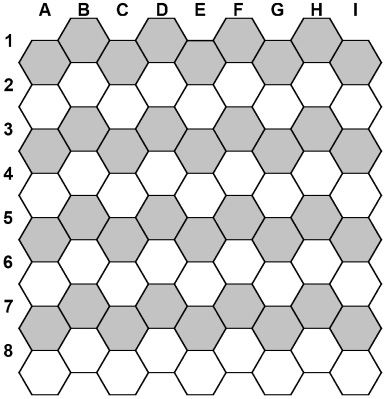 Due to the non-linear nature of the grid the horizontal rows of hexes go up and down slightly, and in the example shown above I have shaded in alternate rows of hexes to make it easier to understand.

When the co-ordinates are added to an existing map (in this case the Battle of Hook’s Farm), the resulting map looks like this: 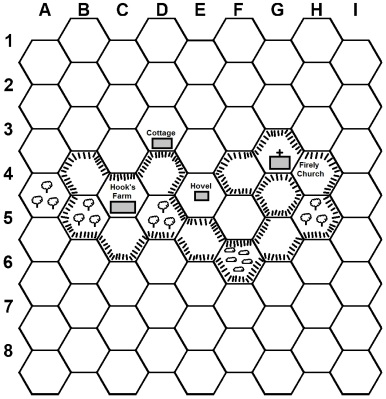 Using such a grid makes it possible for a player to make a note that – for example – a unit has been placed in hex D4, as shown below. 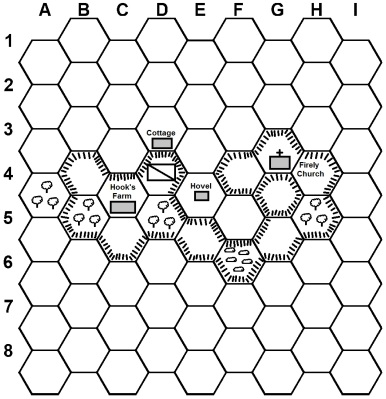 For the life of me I cannot understand why I haven’t done this before, but now that I have, I can use it for any future battles that I fight on a 9 x 8 hex grid.

The two illustrations shown above are both in .jpg format, which not everyone can easily download and then use to draw their own maps on. I have therefore provided a .gif format version below. This can be downloaded into a program like MS Paint and used ‘as is’ or saved into .bmp format, and then used.

Although I retain the copyright on this particular grid, I give permission for users to download it for their own personal use. If it is used in any publication (printed, electronic, or in any other format), I expect my copyright to be acknowledged.

A problem with La Ultima Cruzada!

Posted: November 28, 2017 | Author: Robert (Bob) Cordery | Filed under: Spanish Civil War, Wargames publications | 8 Comments
Last night I received the printed proof copies of LA ULTIMA CRUZADA … and discovered to my horror that during the printing process some of the formatting has been removed or altered, with the effect that a number of blank spaces have appeared in the text where they should not be and the pagination has been altered, leaving the Contents page with incorrect page numbers for each section and chapter.

I compared the printed version of the book with my original .docx file, and I could find no reason for this to happen. I then contacted Lulu.com in the hope that they could sort the situation out, because until it is, I cannot release the book for publication.

Amber, one of Lulu.co’s online support workers, spent a hour helping me to solve the problem. It appears that if I upload the book as a .docx format file, the conversion process can alter the publication’s formatting. She advised me that this can be avoided by uploading the book in PDF format. However, when I tried to do this there were problems with the upload, which kept telling me that there were errors relating to embedded fonts in the file. In the end I sent the file directly to Amber, who was able to upload it for me.

On her advice I downloaded and checked the PDF file that will be used to print the book, and I have ordered another printed proof copy to make doubly sure that it is exactly the way I want it to be before releasing it for publication. Hopefully this printed proof copy will arrive within a week or so, but if it doesn’t I might miss the Christmas deadline I set for the book’s publication.

Other people’s Portable Wargames: Some of Stephen Briddon’s battles

Posted: November 27, 2017 | Author: Robert (Bob) Cordery | Filed under: Battle Report, The Portable Wargame | 20 Comments
Stephen Briddon has been using my PORTABLE WARGAME rules since before they were published, and was one of the wargamers who gave me very useful feedback during their development. He has continued to use them, and what follows are some photographs of some of his battles. 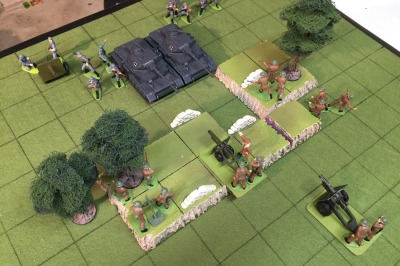 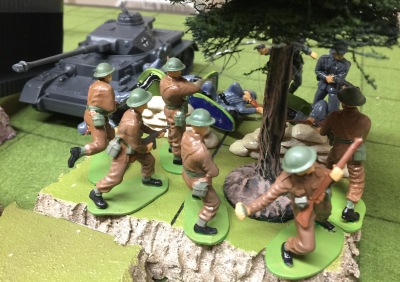 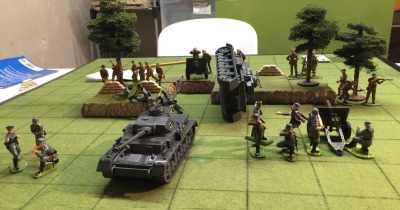 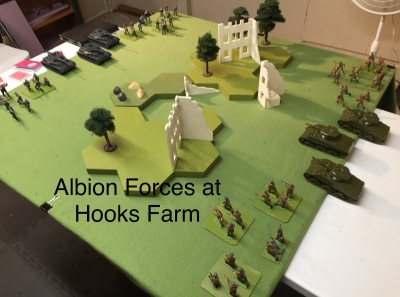 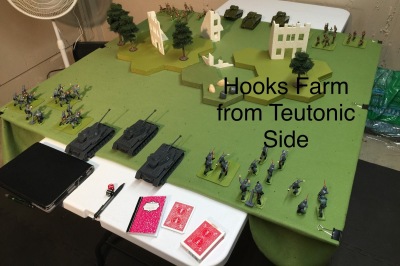 (The corners of each hex are marked with a dot, which makes them almost invisible in these photographs.)

A desert battle … using 20mm figures on a hexed grid 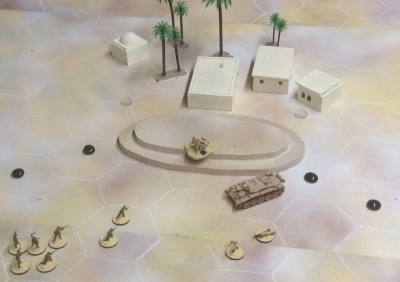 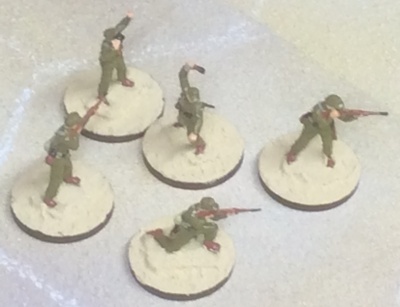 Please note that the photographs featured above are © Stephen Briddon.

Posted: November 26, 2017 | Author: Robert (Bob) Cordery | Filed under: The Nugget, Wargame Developments, Wargames publications | 4 Comments
The editor of THE NUGGET sent the latest issue of the magazine to me yesterday afternoon, and I hope take it to the printer on Monday morning. This should mean that it will be printed and posted out to members of Wargame Developments by next Friday or Saturday.

IMPORTANT: Please note that this is the fourth issue of THE NUGGET to be published for the 2017-2018 subscription year, and that members who have not already re-subscribed can do so by visiting the relevant page on the Wargame Developments website.

Posted: November 25, 2017 | Author: Robert (Bob) Cordery | Filed under: 18th Century, Battle Report, The Portable Wargame | 10 Comments
Ross Macfarlane and his friend Ron have been at it again. This time they have been using an adapted version of the Ancient rules from DEVELOPING THE PORTABLE WARGAME to fight a Seven Years War battle! 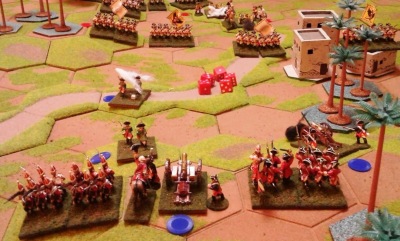 The battle report makes for interesting reading, and has given me several ideas regarding the possibility of writing a Seven Years War version of my own NAPOLEONIC PORTABLE WARGAME rules. These are currently in the very early stages of development, and I hope to publish them at some time in the future. In the meantime I recommend that anyone interested in using my PORTABLE WARGAME rules for other periods should read Ross Mac’s excellent battle report.

Please note that the photographs featured above are © Ross Macfarlane.

A visit from Arthur Harman

Posted: November 24, 2017 | Author: Robert (Bob) Cordery | Filed under: MIscellaneous musings, The Portable Wargame, Wargames publications | 12 Comments
Yesterday Arthur Harman (a regular contributor to the pages of MINIATURE WARGAMES) paid Sue and I a visit, and this gave me the opportunity to get some toy soldiers onto my tabletop and for Sue to exercise her skills as a hostess.

Arthur is currently writing an article about adapting my PORTABLE WARGAME rules for use as a kreigsspeil, and one of the reasons for his visit was so that we could set up and go through a couple of scenarios that we could photograph and use to illustrate his article. The scenarios we chose were ‘Forcing the defile‘ from my recent mini-campaign and ‘The Battle of Hook’s Farm’ from H G Wells’ LITTLE WARS.

The first was set up using the same figures and terrain as those featured on my recent blog entry, but using a more distinct colour scheme for the Heroscape terrain tiles in order to make the various contour level more obvious. 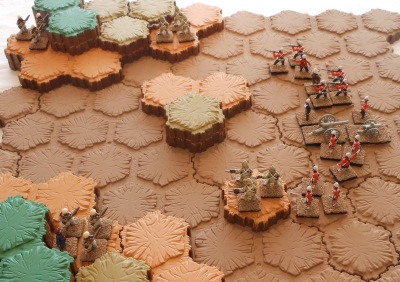 The second scenario was set up using my Hexon II hexed terrain and figures from my 25/29mm Napoleonic collection, and was the first time these particular figures have been used in a tabletop battle. 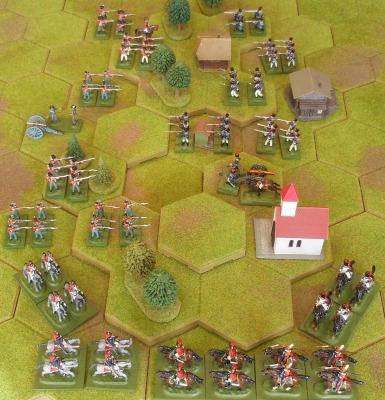 We had a great time, and I hope that Arthur’s article will appear on the pages of the magazine in the near future. Even if it doesn’t, we still had a great day pushing toy soldiers around on my wargame table, and I look forward to wargaming with Arthur again at some time in the New Year.

The periodic sort out … is sort of finished … for the moment

Posted: November 22, 2017 | Author: Robert (Bob) Cordery | Filed under: MIscellaneous musings | 22 Comments
I have just finished the periodic sort out I began yesterday and I have finished … for the time being. The toy/wargame room now looks like this: 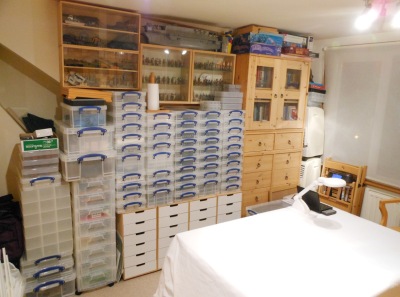 During the process of sorting out the detritus that seems to have accumulated over the last couple of years, I have realised that I must seriously consider downsizing my current stock of figures etc. I have figures, buildings, and other wargaming bits-and-pieces that have not seen the light of day for years … and are not likely to again in the foreseeable future.

So why keep them? If I can sell them or pass them on to someone who will use them, it will free up space in my toy/wargame room and generate a bit of cash to spend enhancing the collections that I do keep.

I am going to wait until after Christmas before I do anything further, but it is something that I now know that I have to do.

For those that are interested, the photograph above shows some (56 to be precise!) of my REALLY USEFUL BOXES in use. The majority are 4 litre boxes, with a few larger ones used where necessary.

A periodic sort out

Posted: November 21, 2017 | Author: Robert (Bob) Cordery | Filed under: MIscellaneous musings | 24 Comments
Looking around my toy/wargame room on Sunday, I was stuck – for the umpteenth time – by how untidy it had become over recent months. After some further deliberation I decided that rather than put off sorting it out – again – I’d seize the nettle and actually have a go … and that is what I have been doing today.

I suspect that I am not going to finish today, but I plan to do as much as I can and complete the job as soon as I can.

Posted: November 20, 2017 | Author: Robert (Bob) Cordery | Filed under: Wargames publications | Leave a comment
The latest issue of this magazine arrived on Friday, and I have been reading it over the weekend. 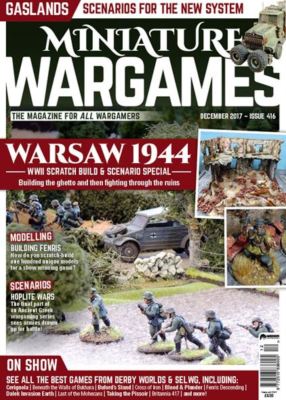 So what did I enjoy in this issue?

There were no ‘stand out’ articles this month, but there was plenty of them that were worth reading. For example, Conrad Kinch’s column pointed me towards several things on YouTube that look of as if they might be of interest to me, and Jim Webster’s article and rules about street fighting made me realise that I really ought to consider trying to wargame urban fighting one day.

One feels that after a period of hiatus this magazine is beginning to find its feet. Its layout seems to have improved considerably over recent months and one pleasing development is the fact the the Club Directory has shrunk to just two pages.