Posted: November 30, 2016 | Author: Robert (Bob) Cordery | Filed under: Uncategorized | 4 Comments
I have managed to finish the last batch of Napoleonic French Light Infantry that I will be adding to my collection for the time being. 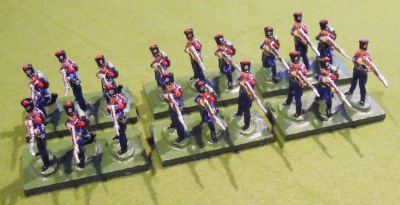 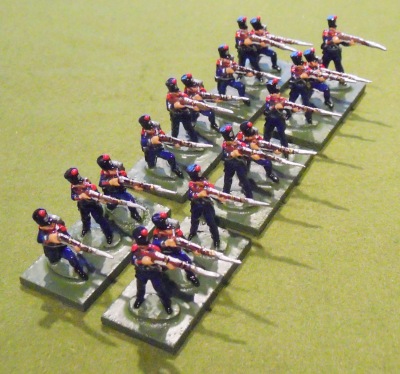 I am now going to take a bit of a break until Christmas. I then hope to return to this project fully energised and raring to go!

Ships of the Nationalist and Republican Navies during the Spanish Civil War: España-class Battleships

Posted: November 29, 2016 | Author: Robert (Bob) Cordery | Filed under: Spanish Civil War | Leave a comment
The class was built at El Ferrol between 1910 and 1921. They were the smallest dreadnought-type battleships ever constructed. The completion of Jaime I was considerably delayed by the non-delivery of material, including the main armament, from Britain due to the outbreak of the First World War. España was originally named Alfonso XIII.

España served in the Nationalist Navy and sank after hitting a mine on 30th April 1937.
Jamie I served in the Republican Navy. She was damaged by Nationalist bombing whilst at Cartagena, and was subsequently scuttled there on 17th June 1937 following a fire that was caused by an accidental magazine explosion.

Posted: November 28, 2016 | Author: Robert (Bob) Cordery | Filed under: Book Review, Early 20th Century | 2 Comments
Sue and I have visited Croatia (or Hrvatska) many time on cruises to the Adriatic, and when I saw the latest addition to the Osprey Men-at-Arms series (No.508), I had to buy it.

It deals with the histories of and the uniforms worn by:

This book compliments the other books produced by Osprey about the war in the Balkans, including PARTISAN WARFARE 1941-45, AXIS FORCES IN YUGOSLAVIA 1941-45,and TITO’S PARTISANS 1941-45, all of which I already own.

My Portable Wargame book: Yet another update

I have now added two sets of rules – one for the late nineteenth century (including Colonial) and one for the early to mid twentieth century – and I now need to write two illustrated battle reports that explain how the rules work. These are going to take some time and quite a lot of effort to get right, and I am thinking of leaving them until I have a block of uninterrupted time available.

At present the book is A5 size, and is just over 70 pages long. Once the battle reports are added I suspect that it will be close to 100 pages in length. I have no idea how much they will sell for, but as I am writing this book to ‘spread the word’ rather than to make huge amounts of cash, I will try to keep the price under £10.00.

As a flavour of what the book looks like, here some images of some of the existing pages: 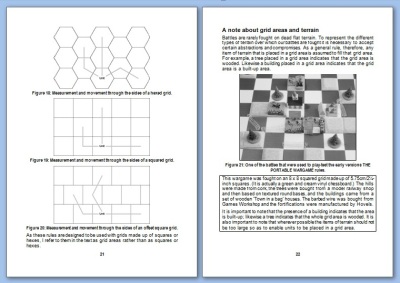 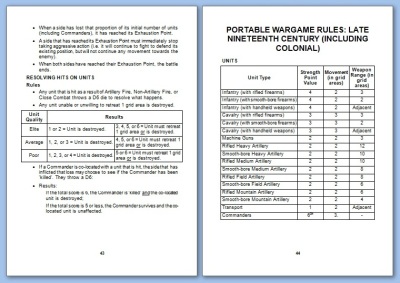 HMS Haslemere was a small, former ferry that was commissioned and used by the a Royal Navy as a barrage balloon ship. She was built in 1925 for the Southern Railway in the Meadowside Yard of Messrs D & W Henderson, Glasgow. She operated out of Southampton to the Channel Islands and Northern France until she was requisitioned in 1940.

Haslemere before she was requisitioned.

Haslemere was decommissioned in early 1945, refitted in Glasgow, and returned to service as a ferry with Southern Railways in June 1945. She was sold for scrapping in 1959.

Posted: November 25, 2016 | Author: Robert (Bob) Cordery | Filed under: Wargames publications | 8 Comments
The December issue of MINIATURE WARGAMES magazine was delivered yesterday afternoon, and I have read it with avid interest. I am still getting used to the new layout, and I am still unsure if I like it or not. That said, it is the contents which is the important thing, and this issue has quite a lot stuff in it that was of particular interest to me.

Other than ignoring the 16-page Fantasy Facts section which was of no interest to me whatsoever, I found the rest of the contents of informative.

My ‘stand out’ articles were Conrad Kinch’s Send three and fourpence (as usual!) and David Burden’s Grid Based Wargaming. My interest in the latter needs little explanation to my regular blog readers, and indicates the growing level of interest in grid-based figure wargaming.

The death of Amy Johnson

At the time I understood that Amy Johnson died when her aircraft crashed into the Thames Estuary about twelve miles north of Herne Bay … but I subsequently discovered that the truth was somewhat more complicated.

Amy was a member of the Air Transport Auxiliary. This was a group of male and female civilian pilots who ferried military aircraft between factories, Maintenance Units (MUs), and active service squadrons and airfields. It was during one such flight that Amy Johnson died.

On 5th January 1941, Amy was flying an Airspeed Oxford from Prestwick to RAF Kidlington near Oxford when she went off course due to bad weather.

It would appear that the Oxford ran out of fuel and Amy bailed out. Her parachute was seen by the crew of HMS Haslemere, and she was seen to be alive and in the water. The ship’s commanding officer – Lieutenant Commander Walter Fletcher – dived in to save her, but the heavy seas, strong tide, and snow prevented him from doing so. He was rescued, but later died in hospital. He was awarded the Albert Medal posthumously for his attempt to save Amy.