Posted: April 30, 2009 | Author: Robert (Bob) Cordery | Filed under: The Nugget, Wargame Developments, Wargames publications | Leave a comment
I will be collecting the latest issue of THE NUGGET (N226) later this morning, and it should be in the post and on its way to members early this afternoon. It should, therefore, be with members by later this week or early next week. 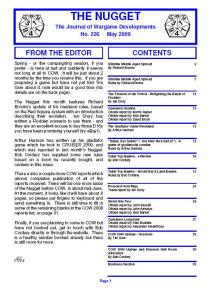 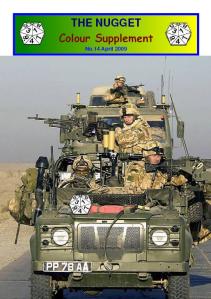 The PDF version is now available online via the Wargame Developments website. All members should now have received the password they need to read the PDF, but if they have lost it or cannot remember it they should contact me.

The philosophy, practice, and practicality of wargames design

Posted: April 29, 2009 | Author: Robert (Bob) Cordery | Filed under: Wargame Design, Wargame Developments | 5 Comments
One thing that I have never understood is why the creators of wargames rules do not – as a rule – write designer’s notes to go with their rules. Some do (e.g. Frank Chadwick) but others do not, and I find that it is the latter group whose rules I find more difficult to understand. Often you need to ‘get inside the designer’s head’ to understand what they are trying to achieve with a particular game mechanism, and if there are no explanatory notes, this is more guesswork than anything else.

Perhaps it is because I moved from teaching History to teaching Information Communication Technology that I learned to always try to put down on paper some sort of ‘specification’ before beginning the ‘design’ process. It becomes the skeleton onto which I ‘build’ my rules. I also try to make my rule mechanisms self-contained (e.g. a card driven activation system that is suitable for both solo and face-to-face games) so that if it does not work after ‘testing’, I can pull it out and replace it with something that does work.

Finally I always apply what was once termed ‘Cordery’s Rule’ by another member of Wargame Developments; this states that ‘if, after a few game turns, a player does not remember to use a particular rule or game mechanism during a game, and the game has functioned without that rule or game mechanism, then think seriously about removing it’.

I think that wargame design should be a process of reduction NOT expansion; the latter does not lead to better design or more realism … it just leads to confusion!

Some thoughts about designing an operational-level wargame

Posted: April 28, 2009 | Author: Robert (Bob) Cordery | Filed under: Wargame Design, World War II | 4 Comments
I have been trying to make a list of all the basic design elements I want to include in my operational-level Eastern Front wargame. So far the list includes (in no particular order): 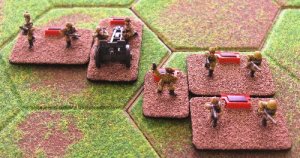 This is the starting point for my design; it is my ‘specification’. All I need to do now is to begin the ‘design’ process before proceeding on to ‘implementation’, ‘testing’, and ‘evaluation’.

Posted: April 28, 2009 | Author: Robert (Bob) Cordery | Filed under: The Nugget, Wargame Developments, Wargames publications | Leave a comment
I hope to take the latest issue of THE NUGGET to the printers later this morning and I should be able to pick it up on Thursday or Friday. With any luck I hope to get it out in the post by Monday next week, and it should be with members later that week.

I hope to upload the PDF versions of the latest issues of THE NUGGET and THE NUGGET COLOUR SUPPLEMENT to the Wargame Developments website over the coming weekend so that members (including e-members) can read it before the printed version arrives in the post.

Posted: April 27, 2009 | Author: Robert (Bob) Cordery | Filed under: COW (Conference of Wargamers) | 2 Comments
Thanks to the fact that the road works that have made my trips to and from work a nightmare for the past two months are now finished, I was able to drive home in just under thirty minutes tonight … about a third of the time it took me one day last week!

Having an hour extra free time this evening gave me the incentive to make the additional activation and unit cards for the slightly expanded version of SOLFERINO IN THIRTY MINUTES that I and Richard Brooks will be taking to COW (the Conference of Wargamers) in July. As a result I now have a set of activation cards for Marshal Canrobert and unit cards for his French III Corps. All I need to do now is to laminate them and then –as the French say – voila!

A time for reflection

Posted: April 26, 2009 | Author: Robert (Bob) Cordery | Filed under: COW (Conference of Wargamers), Napoleonic Wars, Table Top Battles, World War II | 2 Comments
Having finally had a few hours of time to myself, I have been able to think about what project or projects I want to proceed with next.

I have now boiled it down to the following:

The joys of blogging

Posted: April 26, 2009 | Author: Robert (Bob) Cordery | Filed under: MIscellaneous musings | Leave a comment
Sitting at my computer, re-reading my own blog entries as well as reading the most recent entries on the blogs that I follow, I realised how much blogging has enhanced my wargaming over recent months.

Firstly, I have come into contact with a lot of other wargamers via the blogging community, and I have found their enthusiasm for all sorts of different types and styles of wargaming very infectious.

Secondly, I find what other wargamers are doing and writing about in their blogs inspiring, and this has helped me to focus on developing projects that would otherwise have remained in the ‘to be done later’ file.

Thirdly, I find the process of writing my blog entries makes me THINK about what I am doing, and this has helped me to DO far more than I would otherwise have achieved.