Posted: June 3, 2018 | Author: Robert (Bob) Cordery | Filed under: Book Review, Warships | Leave a comment
Like a lot of people of my age, one of the things that I looked forward to each year were the Annuals that were published in time for Christmas. Even though I am a lot older, there is one annual that I always look forward to reading when it is published … WARSHIP.

WARSHIP first came out in 1977, and the current issue is the fortieth volume to be published. It was originally a quarterly publication, but after several years it moved over to become an annual.

The current volume contains the following:

At first glance this looks as if it is going to be one of the best issues ever, with every single article or section having something that I will enjoy reading and re-reading. In particular, the coverage of the battle damage suffered by Graf Spee at the Battle of the River Plate is going to be very helpful when it comes to designing wargames, and the article about Russian Monitor designs contains some wonderful ‘what if’ designs that would be relatively easy to model, and which would – if suitably updated for service in the Soviet Red Fleet – have posed serious problems for the Kriegsmarine during Operation Barbarossa.

An excellent publication … and I will be ordering next year’s issue as soon as I can!

Posted: May 16, 2018 | Author: Robert (Bob) Cordery | Filed under: Colonial, Modelling, Warships, World War I | 18 Comments
I am about to start writing what I think will be the last chapter of my book about gridded naval wargames, and it will feature an explanatory battle report about the fight between the British gunboats Mimi and Toutou and their German opponent, Kingani.

The models I am using are approximately 1:600th-scale and were built from various bits and pieces I had in my spares box; in other words, some spare ships’ boats and light guns from Airfix warship kits. For ease of handling they were stuck on pieces of Plasticard and labelled. They are not the most beautiful models I have every built, but they serve me well enough in several tabletop battles. 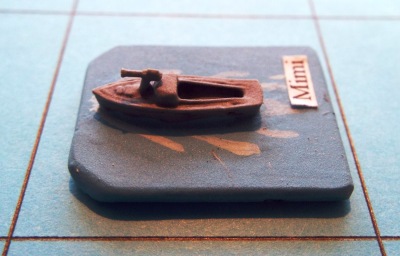 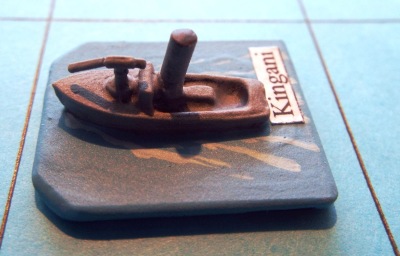 The story of how Mimi and Toutou got to a lake in the centre of Africa is an epic tale that inspired C S Forester to write THE AFRICAN QUEEN and would make a wonderful film.

I built her nearly six years ago (doesn’t time fly when you are having fun!) from basswood, bamboo skewers, and pine dowel and she has served me well in several tabletop battles … although not always under her given name! 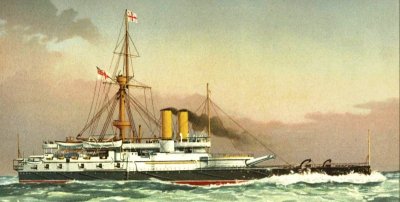 … with a touch of HMS Rupert.

The former sank after accidentally colliding with HMS Camperdown in the Mediterranean on 22nd June 1893, and the latter spent most of her career in reserve or serving as a port guard ship around the world (Hull, Pembroke, Gibraltar, Port Said, and Bermuda).

The Zeebrugge and Ostend Raids: The blockships

Posted: April 30, 2018 | Author: Robert (Bob) Cordery | Filed under: Early 20th Century, Late 19th Century, Warships, World War I | 6 Comments
The five blockship used during the Zeebrugge and Ostend Raids on 23rd April 1918 were all drawn from the Apollo-class of 2nd class Protected Cruisers. There were twenty-one ships in the class plus eight of the slightly modified Astrea-class, and they were built between 1889 and 1892.

Their characteristics when built were:

By the time that HMS Dreadnought was launched, the protected cruisers were already becoming obsolete, and seven of the class (HMS Andromache, HMS Apollo, HMS Intrepid, HMS Iphigenia, HMS Latona, HMS Naiad, and HMS Thetis) were converted into minelayers in 1907.

Six of the class were converted into blockships for the Zeebrugge and Ostend raids. These were:

To prepare them for their use as blockships, the vessels were stripped of most of their armament and many compartments were filled with concrete. The extent of the damage inflicted on the blockships during the raids can be gauged by the following photograph:

Posted: April 25, 2018 | Author: Robert (Bob) Cordery | Filed under: Early 20th Century, Late 19th Century, Warships, World War I | 8 Comments
HMS Vindictive was one of four Arrogant-class Protected Cruisers that were built between 1895 and 1900. The other ships in the class were HMS Arrogant, HMS Furious, and HMS Gladiator.

The Arrogant-class protected Cruisers as built.

By the outbreak of the First World War, the design of the Arrogant-class Protected Cruisers was obsolete, and only HMS Vindictive took an active part in the conflict. HMS Gladiator had sunk in 1908 as a result of a collision with the merchant ship SS Saint Paul, whilst HMS Arrogant had become a Submarine Depot Ship in 1911 and HMS Furious had been paid off and hulked in 1912. (She was renamed HMS Forte in 1915 to release the name for the new Light Battlecruiser that was being built.)

The ship’s characteristics were:

One of the 7.5-inch Howitzers and several of the 3-inch Stokes Mortars fitted to HMS Vindictive.

HMS Vindictive on her return from Zeebrugge. 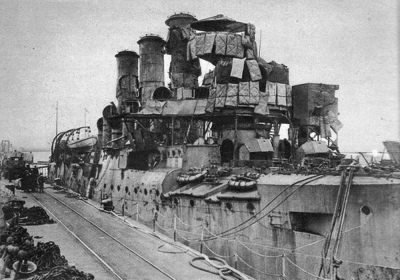 After her heroic service during the Zeebrugge Raid, the very badly damaged HMS Vindictive was expended as a blockship during the second raid on Ostend.

An even older Paraguayan River Gunboat!

She began life as a river tug, and was purchased and converted into a river gunboat soon after she was launched. She was originally armed with a single 3″ gun, but in the late 1980s this was replaced by a 40mm Bofors automatic cannon, two 20mm Oerlikon automatic cannons, and two 0.5″ machine guns.

At the same time as she was re-armed, the ship was modernised. Her original steam engines were replaced with new diesel ones, and her superstructure was completely re-modelled. She was certainly still in service in 2016 … one hundred and eleven years after she was launched!

Posted: April 5, 2018 | Author: Robert (Bob) Cordery | Filed under: Chaco War, Early 20th Century, Warships | 2 Comments
One unusual aspect of the Chaco War was that although both belligerents were land-locked, the Paraguayans had a navy that took an active part in the war/

A map of the area shows why.

Two rivers – the Paraguay and the Pilcomayo – effectively bordered the area claimed by Paraguay, and they were able to use them to supply and support their forces in the Chaco area. As a result, the Paraguayans had a small but very effective navy.

The backbone of the Paraguayan Navy were two river gunboats, the Humaitá-class gunboats. These had been designed in Paraguay with Italian assistance, and built in Genoa by Cantieri Odero between 1928 and 1931.

The ships were named Humaitá and Paraguay and they reached Asunción on 5th May, 1931.

The two ships were used extensively during the war, and still exist today. Humaitá is now a museum ship and Paraguay is awaiting refurbishment that will include the replacement of her engines by new diesel ones.