Out of the Shed: A Triang Minic task force … and friends

Posted: June 19, 2018 | Author: Robert (Bob) Cordery | Filed under: MIscellaneous musings, Naval Wargames | Leave a comment
My first 1:1200th-scale warships were all metal die-casts made by Triang, and I found them when I was sorting through the crates that were stored in our now-defunct shed.

At some point I tried to repaint the last five ships, but this new paint job does not seem to have withstood the trials and tribulations of storage very well.

I also found some plastic America warships that were used to increase the size of the ‘task force’. These appear to be a Forrest Sherman-class Destroyer that is missing its aft funnel, a Fletcher-class destroyer, and a Destroyer Escort.

None of these ships fits in very well with my current 1:1200th-scale wargames fleet, but they could easily find a place in a post-War Cold War fleet.

Posted: April 18, 2018 | Author: Robert (Bob) Cordery | Filed under: American Civil War, Modelling, Naval Wargames | 4 Comments
I have spent quite some time today turning the hand-drawn pencil drawings I made as I constructed my two American Civil War ironclads into proper drawings that other people may be able to follow.

The results are as follows: 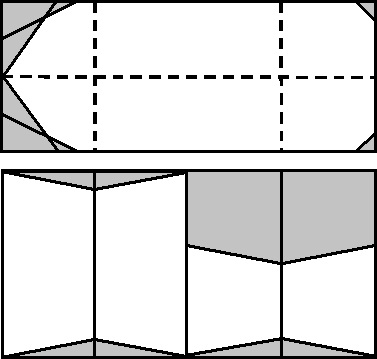 Plans for the Casemate Ironclad.

Plans for the Monitor.

They will be used in my forthcoming book about gridded naval wargames as part of a ‘How to construct simple American Civil War model ironclads’ appendix.

A quiet Monday finishing some models

Posted: April 17, 2018 | Author: Robert (Bob) Cordery | Filed under: American Civil War, Late 19th Century, Modelling, Naval Wargames | 30 Comments
After all the excitement of visiting SALUTE and then writing my photo-report, I managed to spend part of yesterday quietly sitting in my toy/wargames room finishing two models ships that will be featured in my forthcoming book about gridded naval wargames.

I needed a couple of American Civil War ironclads, and so I built a Casemate Ironclad … 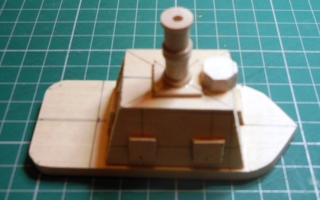 I intend to include an appendix in the book that explains how I built these two models, but the techniques I used are similar to those I have used before.

Before I can use the models, they will need to be given a couple of coats of PVA glue to seal the wood they are made from, after which I will paint them … probably in contrasting shades of dark grey. Once that is done, battle can commence!

Was Admiral Yamamoto was an early wargamer?

Posted: March 10, 2016 | Author: Robert (Bob) Cordery | Filed under: Early 20th Century, Naval Wargames | 4 Comments
Whilst writing about the life of Fred Jane, I remembered a discussion that I had with Richard Brooks – the author of the official biography of Fred Jane – about the involvement of officers of the Imperial Japanese Navy in some of Jane’s early naval wargames.

Some years ago, whilst I was doing research into Jane’s Naval War Game, I acquired a photocopy of the 1901 edition of the rules. It included a section entitled REPORT OF A LARGE COMBINED TACTICAL AND STRATEGIC “WAR” PLAYED AT PORTSMOUTH AND ELSEWHERE IN MARCH, APRIL AND MAY 1900. Amongst the players listed as taking part is a certain “Rear Admiral” Yamamoto (i.e. a young Japanese naval officer stationed in the UK at the time) who commanding the Dupuy de Lomé, the Hertha, and the Jémappes during the opening moves of the war.

(It is interesting to note the following fates of these ships:

It would be great to think that this “Rear Admiral” Yamamoto was in fact Isoroku Yamamoto … but unfortunately my researches seem to indicate that it cannot be. Yamamoto was born Isoroku Takano in 1884, and only became Isoroku Yamamoto in 1916, when he was adopted into the Yamamoto clan in order to ensure that the family name did not die out. Furthermore he did not graduate from the Imperial Japanese Navy Academy as a Midshipman until 1904, just in time to serve aboard the armoured cruiser Nisshin during the Russo-Japanese War. He was wounded at the Battle of Tsushima, and lost the index and middle finger on his left hand.

It would therefore appear that these two Yamamotos cannot be one and the same person … which is a great pity as it would have made for a great bit of wargaming trivia. That said, Yamamoto was a renowned games player and gambler (he is reputed to have enjoyed playing Go, shogi, billiards, bridge, mah jong, and poker) and the Imperial Japanese Navy used naval war games right up until the end of World War II, so he must have taken part in naval wargames during his career … but not in Portsmouth in the early 1900s!

A scene from the film ‘Tora! Tora! Tora!‘ showing officers of the Imperial Japanese Navy taking part in a naval war game prior to the attack on Pearl Harbour. Whilst it makes for a dramatic film sequence, it is doubtful that the participants would have sat in neat rows as shown in this shot. It is far more likely that the post-game debrief would have looked like this.

Posted: March 9, 2016 | Author: Robert (Bob) Cordery | Filed under: American Civil War, Napoleonic Wars, Naval Wargames, Wargames publications | 35 Comments
My recent bit of wargaming ‘detective’ work rekindled my memories of the rules produced during the late 1960s and early 1970s by the London Wargames Section. I certainly owned copies of some of them, and used them for a time.

From what I can find out, they produced rules for the following: 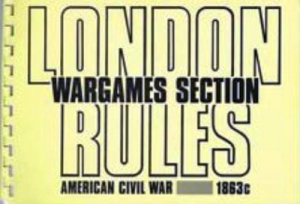 The writers included John Tunstill, Bish Iwaszko, Ed Smith, Sid Smith, and Ken Smith, and were quite innovative for their time.

Fred Jane: One hundred years on

John Frederick Thomas Jane was born in 1865 in Richmond, Surrey, and was the son of the Reverend John Jane. He went to school in Exeter, and after attempting to join the Royal Navy (he failed to get a place in the training ship Britannia due to an undisclosed health problem) and the British Army (he failed the entrance exam for Royal Military College, Sandhurst) he moved to London to try to make his living as a pen-and-ink illustrator and writer. He started out living in an attic in Gray’s Inn Road, Holborn, and in quite a short time he built up a reputation as a illustrator and writer of navy-related stories. This culminated in him being a special correspondent for several publications and taking part in a cruise aboard HMS Northampton in 1890.

An illustration of HMS Northampton drawn by Fred Jane.

His illustrations appeared in many different publications, and some of them had to be produced at short notice and without him actually being able to see the subject! 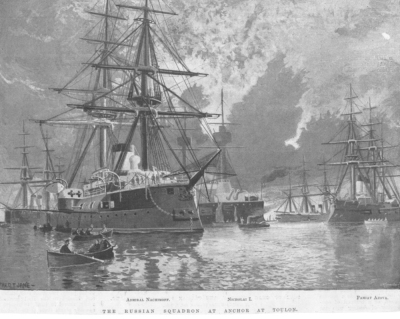 By 1892 he was married and two years later he was living in a basement flat in Chelsea. By then he had already begun to draw some of the illustrations that would eventually appear in his ALL THE WORLD’S FIGHTING SHIPS.

His style of illustration was such that the main recognition features of a ship were easy to see, and each was annotated with a short description that graded its armament, armour, and speed. 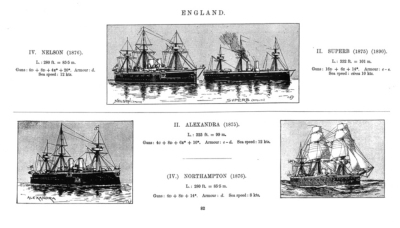 An example of a page from the 1898 edition of ALL THE WORLD’S FIGHTING SHIPS. One of the ships illustrated is HMS Northampton, and it was included – along with the other ships on this page – ‘for completeness’ as Fred Jane assessed her as being obsolete and of little or no fighting value.

In subsequent volumes, the illustrations were replaced by side and plan views, photographs, and – when it was necessary – silhouettes.

A page from a later edition of Jane’s FIGHTING SHIPS. This page is devoted to the Admiral-class battleships, and the silhouettes have been included to aid the identification of individual ships in the class when seen at a distance.

It is interesting to note that the side and plan views showed not only the location and firing arcs of each ship’s (or class of ships) armament, but also the areas that were armoured and the thickness of the armour … which was information necessary for both serving naval officers and people playing Fred Jane’s Naval War Game!

Jane’s Naval War Game evolved over a number of years, and was finally presented at a meeting of RUSI (the Royal United Services Institute) in June 1898, just before the first edition of the rules were published.

The title page of the first edition (1898) of THE JANE NAVAL WAR GAME.

The game proved to be very popular, and campaigns as well as individual battles were fought during the run-up to the outbreak of the First World War.

Special sets of model ships were created for certain customers, including that made for His Imperial Highness Grand Duke Alexander Mihailovitch of the Imperial Russian Navy. 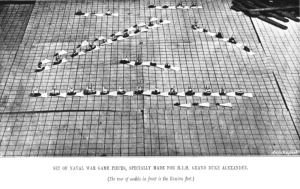 As can be seen from these examples of a ‘target’ …

A ‘scorer’: the damage already done to this member of the Charlemagne-class has been annotated on the ‘scorer’ by an umpire. Considerable damage seems to have been done to the ship’s superstructure but she does not appear to have been holed below the waterline and her main armament seems to be intact.

… they were obviously related to the illustrations used in various editions of Jane’s FIGHTING SHIPS.

What is less well known about Fred Jane is that he was a writer of several science fiction novels, an avid early motorist, a supporter of the use of aircraft, and a prospective Member of Parliament! (He failed to get elected.) 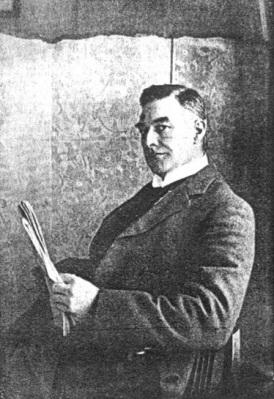 Fred Jane was a man of vision … and someone that I wish that I had been able to meet.

Posted: March 3, 2016 | Author: Robert (Bob) Cordery | Filed under: Naval Wargames, The Portable Naval Wargame | 4 Comments
Before anyone decided to write a comment about the face that the title of this blog entry should read ‘Contemplating my navel’, the ‘mistake’ is deliberate.

The fact that I now own enough Hexon II blue hexes to cover an area of approximately 9′ x 4′ has yet again turned my thoughts towards naval wargaming. Now over the years I have done quite a bit of naval wargaming, and have done my bit to help to popularise both Fred Jane’s Naval War Game and Fletcher Pratt’s Naval War Game. I have also designed quite a few of my own naval wargames, including MEMOIR OF BATTLE AT SEA (MOBAS) and THE PORTABLE NAVAL WARGAME. 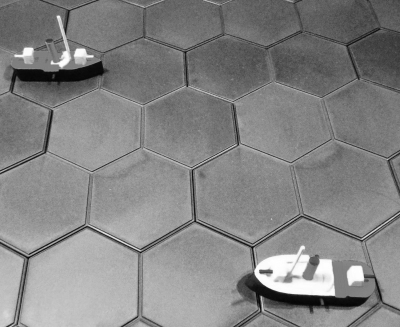 … but now I can begin to think about somewhat larger battles. 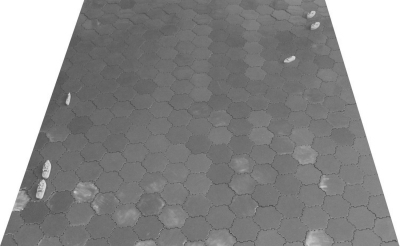 It is 1914 … and the Greek and Turkish fleets approach each other.

Whilst the Turkish cruiser chases its Greek counterpart, the two Turkish battleships close on their Greek opponents.

… and I have decided that this is the sort of action I could set up and fight. Now all I have to do is to build some suitable model ships.