I have been to … the Model Ship Collection at the Tallinn Maritime Museum: Part 4: Freighters and Cargo Ships

Posted: July 31, 2017 | Author: Robert (Bob) Cordery | Filed under: Uncategorized | 2 Comments
Besides being heavily involved in operating a range of both inshore and deep-sea trawlers, the Estonian Merchant Navy has always operated a large number of freighters and cargo ships relative to the size of the country.

This model was used to teach Merchant Navy Cadets how to stow cargo safely and securely aboard a ship.

A few experiments with my Heroscape hexes

Posted: July 30, 2017 | Author: Robert (Bob) Cordery | Filed under: Megablitz, MIscellaneous musings, Wargame Design | 4 Comments
As a result of the feedback I receive after my recent blog entry, I have conducted a few ‘experiments’ to see what units that have bases that are larger than a Heroscape hex would look like on them.

I used some of the Megablitz units that I have in my collection, all of which have slightly larger bases than they need so that magnetic strength markers can be fixed to the back edge of the unit base.

I began with a Russian Rifle unit which has a base that is 50mm x 35mm. (This is larger than the recommended size of a Megablitz Infantry base, which is 35mm x 35mm.)

I then used a Russian Light Artillery unit with a base that is 30mm x 60mm, … 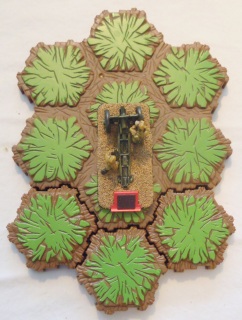 … followed by a Russian Anti-tank Gun unit with a base that is 30mm x 75mm.

I concluded with a Russian Tank unit with a base that is 40mm x 85mm. 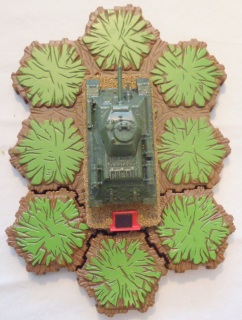 You will note that I added some extra hexes to the last three ‘experiments’ to indicate the units’ ZOC (Zones of Control) and/or the hexes that are adjacent to the hexes ‘occupied’ by each unit.

I found the results of these ‘experiments’ rather encouraging, especially as it would be quite easy to re-base some of my 20mm World War II figure collection onto bases that will fit within the boundaries of one or two Heroscape hexes.

This has given me something to continue to think about, and even if it ends up going nowhere, I am enjoying the process.

I have been to … the Model Ship Collection at the Tallinn Maritime Museum: Part 3: Fishing Vessels

Posted: July 29, 2017 | Author: Robert (Bob) Cordery | Filed under: Uncategorized | Leave a comment
Both before and after the collapse of the old Soviet Union, the Estonian Merchant Navy has been heavily involved in both inshore and deep-sea fishing. A range of large and small trawlers have been used, as have a number of support ships and freezer ships.

Experimenting with my wargame board and Heroscape hexes

Posted: July 28, 2017 | Author: Robert (Bob) Cordery | Filed under: MIscellaneous musings | 22 Comments
Following on from my recent blog entry about the possibility of using my existing wargame board with some of my Heroscape hexes, I decided to conduct an experiment to see what the resulting terrain would look like.

The figures I have used in this experiment are metal 20mm figures, most of which are mounted on 20mm x 20mm bases. It certainly shows that I can get two infantry figures into a single hex without too much trouble, but that artillery (even an infantry gun!) cannot be placed in the same hex as its crew. Likewise the space occupied by a heavy machine gun with two crew would be just a little too large to fit into a single hex, although the same gun with a single crew member fits without any problems.

If I do decide to take this further I will have to:

I have been to … the Model Ship Collection at the Tallinn Maritime Museum: Part 2: Harbour Craft and Icebreakers

Posted: July 27, 2017 | Author: Robert (Bob) Cordery | Filed under: Uncategorized | Leave a comment
The Baltic Sea freezes during the winter months and icebreakers are essential if harbours are to be kept open all year round. Many of those operated in Estonian waters also acted as tugs. 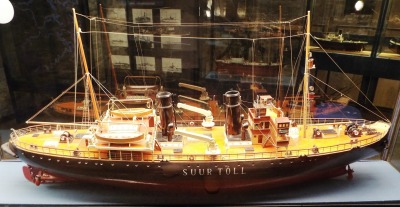 Back to my wargame board!

Posted: July 26, 2017 | Author: Robert (Bob) Cordery | Filed under: MIscellaneous musings, The Portable Wargame, Wargame Design | 10 Comments
Back in February 2015 I built a small, portable wargame board to use with my Hexon II hexed terrain using a robust 2′ x 3′ (60cm x 90cm) notice board (i.e. one made from wood and MDF and not cork).

In order to ensure that the hexes did not move about whilst I was using the wargame board, I attached thin beading inside the edge of the notice board. 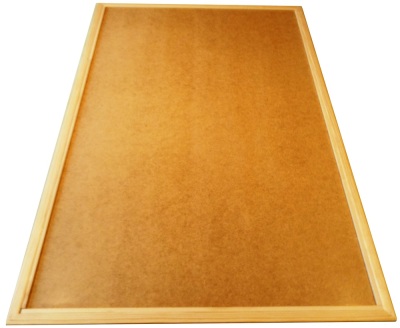 This not only stopped the hexes from moving, but also helped to stiffen the wargame board so that it did not flex as much whilst it was being carried or moved about. 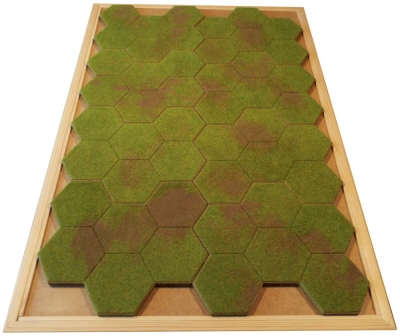 … and the Middle East. 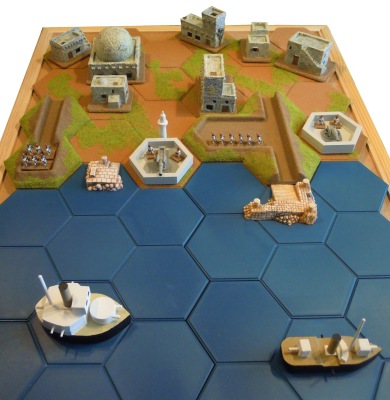 Having seen what MAN OF TIN … 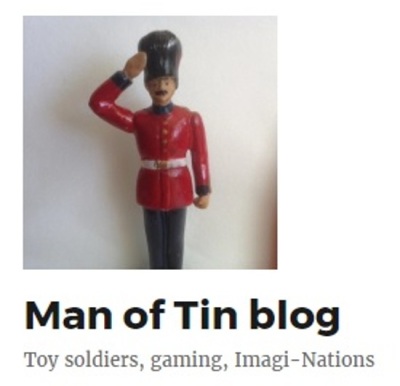 … has done using Heroscape hexed terrain on a small wargame board …

A photograph of MAN OF TIN‘s recent Battle of Pine Ridge River Crossing wargame. It used Heroscape hexes, old Airfix American Civil War figures, and a repainted ‘Train in a Box’ railway set.  I thought that the whole thing was an inspired use of relatively easy to obtain components. © MAN OF TIM.

The Heroscape hexes are 4cm from face-to-face as opposed to the Hexon II 10cm face-to-face hexes, but having a greater number of hexes to manoeuvre on has set me thinking. By using single figures (i.e. one per hex) I might be able to develop a skirmish-level version of my PORTABLE WARGAME rules. Alternately I could deploy smaller figures on the warboard and use the rules as they are … but on a much larger grid that I can get on my normal wargames table.

It is certainly something for me to think about.

An ‘intermittent’ fault can be so frustrating!

Posted: July 25, 2017 | Author: Robert (Bob) Cordery | Filed under: MIscellaneous musings, Spanish Civil War | 4 Comments
Over the weekend we have had what our ISP describes as an ‘intermittent’ fault on our Internet connection. By ‘intermittent’ one might think that the loss of access is only happening occasionally and for a short time. They truth is that we have lost access for hours on end, and often when we have been in the middle of doing something online.

As you can imagine, this has been more than a little irritating, and has meant that I have had work with a cobbled together connection using my mobile phone, Bluetooth, and my iPad. This has allowed me to read emails and surf the net, but not to do much else.

In my frustration I finally started work on re-writing LA ULTIMA CRUZADA, and so far progress has been quite good. I have decided to restructure the content so that it is more thematic (i.e. the chapter on the Spanish Army in 1936 will be followed by chapters on the Republican and Nationalist Armies from 1936 to 1939 … and then I’ll cover the Spanish Navy and Spanish Air Force in the same way). I also intend to add relevant illustrations wherever possible.

This looks as if it is going to be a much longer project than I expected, and is one that I will dip into every so often when the mode takes me.

I have been to … the Model Ship Collection at the Tallinn Maritime Museum: Part 1: Sailing Ships

Posted: July 24, 2017 | Author: Robert (Bob) Cordery | Filed under: Uncategorized | 2 Comments
The Tallinn Maritime Museum has a very large collection of ship models that represent the many and varied types of vessels that have been built, owned, and/or sailed by Estonians. In order to to justice to this collection, I intend to write a number of themed blog entries that cover the types of ships whose models are included in the collection. 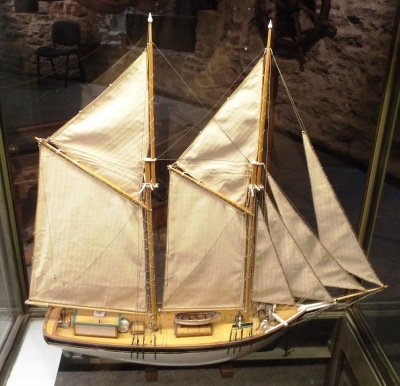 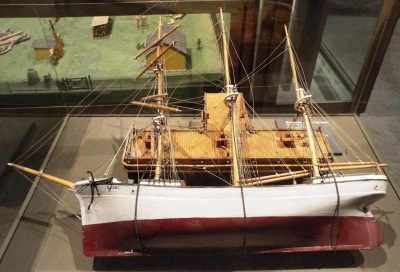 Posted: July 23, 2017 | Author: Robert (Bob) Cordery | Filed under: Early 20th Century, Late 19th Century | 4 Comments
During our recent visit to the Fabergé Museum in the former Shuvalov Palace, St Petersburg, I happened to notice a large number of military images on the walls of the Knight’s Room. They were not captioned, but seemed to illustrate various units of the nineteenth and early twentieth century Imperial Russian Armed Forces. 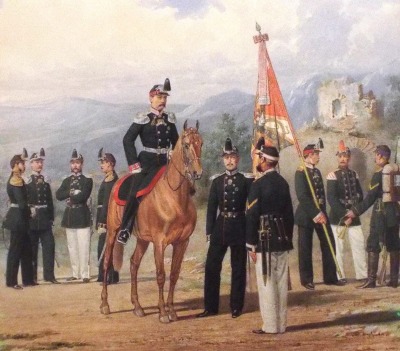 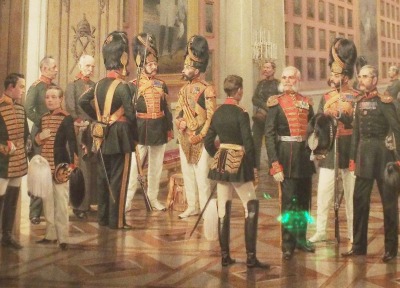 Posted: July 22, 2017 | Author: Robert (Bob) Cordery | Filed under: Uncategorized | 6 Comments
I recently bough a copy of a DVD of BATTLE FOR MOSCOW: PANFILOV’S 28, and have just managed to watch it.

After the initial scenes, during which the numerous characters are introduced to the audience, the film depicts a series of attacks by German Infantry and Tanks on a Rifle Company of 316th Rifle Division. The latter was commanded by General Panfilov, and the film purports to tell the story of the heroic defence conducted by the company during the German offensive to capture Moscow in November 1941. 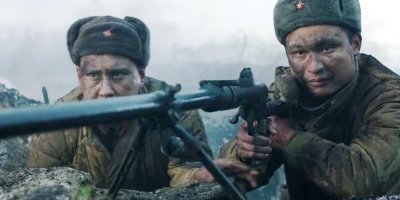 There is some doubt as to whether or not the original story is totally true or whether it might have been a propaganda version designed to bolster Russian morale at a very difficult time. Regardless of that, the film seems to portray the fighting that the 316th Rifle Division took part in very realistically, and shows why the unit was renamed 8th Guards Rifle Division.

I bought my copy of this DVD for £3.00 … and felt that it was very good value at the price. It certainly entertained me for two hours and revived my interest in starting an Eastern Front/Great Patriotic War project at some time in the future.