Posted: January 12, 2018 | Author: Robert (Bob) Cordery | Filed under: Eric Knowles, Wargames on film and TV |16 Comments
Back in the late 1970s Brian Freemantle wrote the first of what has become a number of novels whose central character is one Charlie Muffin. Charlie is a rather scruffy member of the British Intelligence Service (MI6), and the first of the books in the series was turned into a made-for-TV film by Euston Films in 1979.

During some research I am doing into the life of Eric Knowles, I discovered that Eric had supplied the company with wargames figures and models. These were used in several scenes that featured Charlie’s main opponent in the world of espionage, General Valery Kalenin. In the book Kalenin was a veteran of the Great Patriotic War, and his hobby was recreating battles that he had taken part in. IT was one such battle that was featured in the film.

The following are some stills taken from the film. 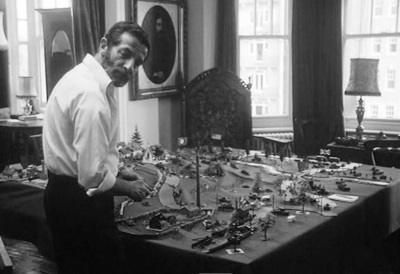 The actor playing General Kalenin is the wonderfully-named Pinkas Braun, and the battle is unusual as it seems to feature German, Russian, and British troops on the same battlefield.

This site uses Akismet to reduce spam. Learn how your comment data is processed.